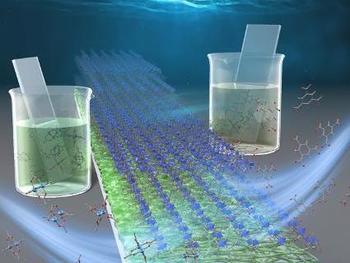 The HKUST-1 film growth amount is highly correlated with the polar component of the surface free energy, indicating that polymer sites, which afford hydrogen and coordination bonding, are important for the initial adsorption of Cu complexes. We also demonstrated a resistive switching device application using an HKUST-1 thin film on the poly(vinyl alcohol) dip-coated film at 40 deposition cycles, which suggests that the HKUST-1 thin film serves as a resistive switching layer with good film formation capability.