The talk in our "Young DGM presents" event series was a little different this time. Whereas we had previously organized specialist lectures, this talk was a bit more critical. 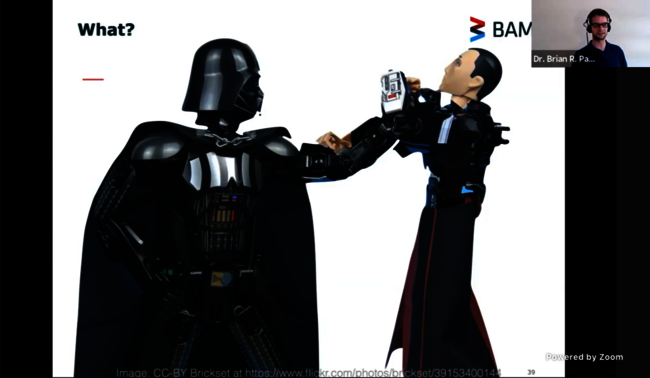 On June 23, 2021, Dr. ir. Brian R. Pauw showed us the dark side of science. In several parts he first went into what is meant by it, why these things happen - whether intentionally or by accident - and finally showed us how to stay on the good side of science.

The dark side of science - what is meant by that? Well, we were shown a wide variety of examples from publications, including some from high-ranking journals, where not everything went according to good scientific practice, so to speak. From images that were over-interpreted to show an outstanding new effect, to nanoparticles copied into microscopy images, to improved or completely invented elemental analyses, to XRD images that were copied and pasted back in scaled form, there was a wide and at the same time disturbing range. We learned about uncovered science frauds and more recent whistleblowers, as well as initiatives trying to further fight the dark side of science.

The second part then focused on the possible reasons why publications are adjusted in this way, either intentionally or accidentally. The main focus was on the connection between publication numbers and one's own job prospects or research funding. It was also discussed to what extent impact factors and citations contribute in this context. Things like fixed-term policies or science policy in general, how these exert pressure on scientists in the system and that the actual "failure" or failure of experiments are not publishable, although failed experiments may well have a higher knowledge content.

The concluding section then addressed what we can do, per se, or what would need to change to prevent the dark side of science from spreading and becoming more popular. There was a discussion about what would have to change in the scientific landscape, for example, fixed-term policies or the handling of traceable data. How young scientists can protect themselves from being influenced by certain pressures and how established scientists can also ensure that good scientific practice is maintained in their fields.

As could be seen from the final discussion and other examples presented by the participants, the topic is unfortunately somewhat depressing and will probably never be completely contained.

Nevertheless or just because of that we would like to thank Dr. ir. Brian R. Pauw for the lecture and the insight it provided. Only in this way can we also discuss critical topics like these and also sensitize us young scientists* to them, since this topic was not yet known to everyone after all - a step in the right direction to bring the dark side of science back into the light again 😉

For more information on Dr. ir. Brian R. Pauw can be found on his blog: lookingatnothing.com