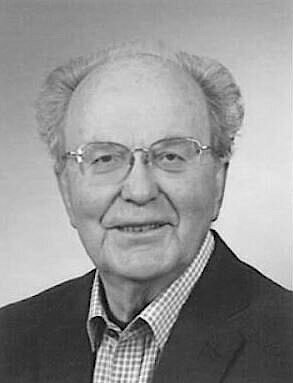 Wolfgang Dürrschnabel was born on 05.12.1934 into a family of teachers in Tübingen. Making music together shaped him from his earliest childhood. After graduating from high school, he also had the option of training as a musician, but fortunately for the semi-finished copper products industry, this was discarded in favor of studying metallurgy. In 1961, he received his doctorate under Erich Gebhardt in Stuttgart and began his professional career at Nukem-Nuklear Chemie in Hanau. As early as 1966, however, he moved to Wieland-Werke AG in Ulm. In 1972, he succeeded Hugo Voßkühler as head of the testing and research department, and in 1993 he was appointed head of the main technology division. Even after his retirement in March 1998, he remained active for Wieland-Werke. For 15 years he looked after the works archive and regularly wrote detailed documentation on a wide variety of technical subjects, such as the history of extrusion, tube, sheet and strip production or the history of the Wieland works railroad.

I first met Wolfgang Dürrschnabel at DGM technical committee meetings. He convinced me in 1982 to join Wieland-Werke AG as well. I had always experienced him as a caring and empathetic boss who made decisions on the basis of well-founded discussions.

In the DGM, Wolfgang Dürrschnabel had been involved in technological expert committees and in 1982 was one of the founding members of the first advisory group "Metallurgical Fundamentals".

In 1971, Wolfgang Dürrschnabel was awarded the Georg Sachs Prize for his studies on the grain growth processes occurring during the recrystallization of copper alloys - in particular homogeneous copper-zinc alloys -, their influence by minor impurities and the resulting microstructure formation. His work was of direct benefit to the copper semis industry.

In 1994, the DGM honored him with the Heyn Medal as one of the few prize winners from industry.

Whenever his job gave him time, he followed the call of nature and hiked with great passion through the Swabian Alb, among other places. But he was also not deterred by sports such as inline skating.

In his home municipality, he was a member of the municipal council from 1972 to 1990 and from 1996 to 2002. He acted as an experienced advisor on questions of technology, the environment and drinking water supply. His neutral and qualified judgment was always in demand. For his many years of service in local politics, he was awarded the Citizen's Medal in Silver in 1998.

Our sympathy goes to his wife Hannelore, his daughters, sons-in-law, grandchildren and great-granddaughter.