Michéle Scholl, representative in the DGM Young Scientists Committee, was in charge of two workshops at the 24th KaWuM in Dresden this year. What moves the young DGM? What are the problems and possible solutions? - Two reports. 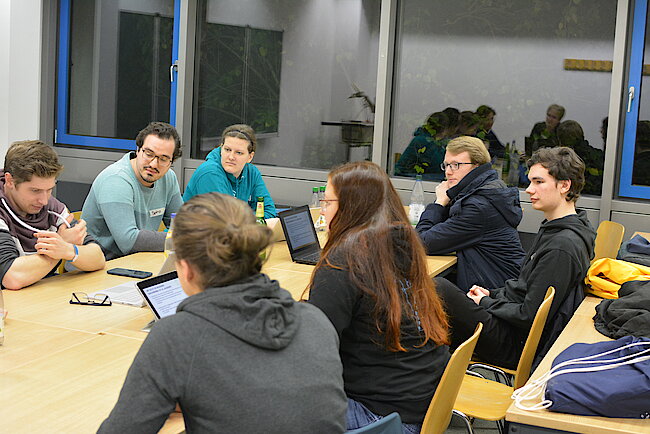 For several semesters now, it has been noticeable that the number of first-year students in the field of MatWerk is slowly declining. The worrying development is also noticeable in the circles of the student representatives. Therefore, ideas are being collected again and again on how to counteract this and how to make sense for the department.

The first step in this workshop was to consider what measures have been taken by the colleges so far. Some universities have made promotional videos. The professional videos in particular have a manageable number of clicks despite being of high quality. In the discussion, the consensus was that the problem starts earlier. Students who have never heard of materials science or materials engineering will not search for a video for it, even though they would feel comfortable in the subject area.

Therefore, a specific call to action for all student councils was to contact their faculties and organize visits to schools to introduce the subject area. Some universities already offer programs to do this, such as covering travel costs to their own schools. At the KaWuM next year in 2023, it will be reported whether school visits have been carried out, and how they have been received.

The DGM Young Scientists Committee is also working intensively on this topic in a working group. Since Michéle Scholl, a representative of this DGM working group, also chaired the workshop at this year's 24th KaWuM in Dresden, it was possible to report on the DGM's ideas. The approaches already collected met with great approval and one or the other person wished to also support the working group in its projects.

Especially in this field, the DGM and the KaWuM can work closely together in order to inspire new people for the field and thus bring the number of new students back up in the long term.

After it had been repeatedly mentioned in the previous semesters that a cooperation with the DGM would bring many advantages to both sides, a workshop was held again this time in order to determine concrete points where a cooperation would be appropriate.

Fittingly, the current DGM President, Prof. Dr. Martina Zimmermann, took the time to participate in this workshop online. In order to bring all participants up to the same level, the DGM and its fields of work were introduced in detail at the beginning of the workshop. Already here it became clear that the work of KaWuM and DGM overlap in many areas.

Thus it was discussed which events could be organized together by DGM and KaWuM. Besides the excursions, the MatWerk-Slam is a good example. In cooperation with the DGM, it would also be possible to expand the circle of speakers to include institute employees at the event location and also to enable the public to listen in. How exactly this slam will take place will be clarified in the upcoming preparations for the next KaWuM.

Particularly interesting for the participants is the work of the young DGM local groups. At the individual locations, the goal here is to bring the MatWerker*innen also into a professional exchange. The young DGMs and the student representatives would complement each other very well. In order to clarify this, some event formats of the young DGMs were presented and questions were answered.

Prof. Dr. Zimmermann also answered many questions and was pleased about the great popularity of the workshop at the KaWuM. A closer link between the DGM and the KaWuM brings a lot of potential for new events.